by Maddalena Pennacchia in Voice in the matter

I-LARK: Welcome to Voice in the Matter. I am i-lark and today, in our first podcast our guest is Ciro Caravano. Hi Ciro!

I-LARK: So, what is there to be said to introduce Maestro Ciro Caravano? Arranger, producer, pianist, orchestra and choir conductor, teacher, founder of Neri per caso in 1995, perhaps the most famous Italian ‘a cappella’ group. What else Ciro? I am almost out of breath to say all the things you do.

I-LARK: But you did much more than this! Look, to prepare myself I had to read a lot of stuff! Anyhow, the reason why I wanted you in the first podcast of Voice in the matter dates back to when you were about 16 years old. It was the time when you used to visit Ravello, on the Amalfi Coast, with the Crecason.

CIRO CARAVANO: It was the name of the first group that later developed into Neri per caso. We were still searching for a name. We were ‘six characters in search of an author’. And we finally found the author: Claudio Mattone. He told us: “What you do is great, guys! But we have to find a name!”. Crecason was the union of the beginning of our surnames, which is just like a crossword puzzle. So we left that name behind.

I-LARK: Well, you were all so good as Crecason as well! And I remember that at the time, in Ravello, it could happen that when standing at a bar in the main square all of a sudden you could hear the Crecason singing. Or, since you have that rare quality, the absolute pitch, one of the amusements was to challenge you on that: for example, someone banged a teaspoon on a railing and asked Ciro: what note is that?

CIRO CARAVANO: How many bets have I won!

I-LARK: When you were 16 years old (and I was a few years older than you) you told me something that you told me again when we met recently, after many years of losing sight of each other, and that is that the human voice in singing reaches the human ear much faster than any other musical instrument. I’d like you to say something about that.

CIRO CARAVANO: Of course! I confirm what I told you when I was 16 and more recently: it’s a fact! From the moment we are born, we get used to understanding and interpreting what other people’s voices tell us; from the moment we are born, we become familiar with this fantastic instrument: the voice. This familiarity can be found in experts in musical instruments, those who are accustomed to hearing orchestral music, and I imagine, for example, conductors or maestri who are familiar with their instruments because they spend so much time playing them or hearing to them that they are able to interpret and understand all the nuances of those instruments. On the contrary, listeners who are not accustomed to instrumental music simply miss those nuances, as if the instrumental sounds were words spoken in a language they cannot understand. So, for someone who is not used to the specific musical discourse, it is difficult to distinguish the sound of a saxophone from that of a bass flute, for example, or the sound of a piano note from that of a guitar within a complex musical context; but if you put that same person in the context of a discussion with four people, they will be able to distinguish one voice from the other, what everyone is saying in an absolutely natural way. The point is that we are experts in listening to and interpreting voices, and this experience, which we gain and perfection over a lifetime, is the basis of our understanding of polyphonic singing. It makes us distinguish the individual movements and also the beauty of the harmony.

I-LARK: Speaking of which… you are a fantastic arranger for voices only! Every time I hear your vocal arrangements, your vocal harmonies, I feel as if those voices were resonating inside myself; your harmonies are so intense and beautiful. Of course, you’re also a splendid instrumental arranger: you’ve worked for many years with Mattone, in short, you’ve arranged many songs or even whole albums for famous artists. But when you arrange for voices, you have a special talent. And on the other hand, this intuition of yours, ever since you were a teenager, is what led you to found Neri per Caso, and they really have been a phenomenon and are a very interesting phenomenon. In Italy almost unique.

CIRO CARAVANO: There are a number of other vocal bands and they are good! We are happy that others are doing the same kind of music.

I-LARK: I wanted to ask you about two records you produced for Neri per Caso: Angoli diversi and Donne, which you arranged with your brother Diego. The first is for male voices and the other for female voices. In each album you had very important guests, famous singers, who sang (lucky them) accompanied only by the Neri per caso’s vocal harmonisation. Can you tell me something about these two experiences?

CIRO CARAVANO: An important difference is that in Angoli diversi, where we sang with male singers, there were fewer problems with keys. In Donne, instead, were we sang with female singers, we clearly had to come up with a few more tricks: some modulations and key changes to allow the guest to sing with us and we with her. But beyond that, on a human level, the experience was fantastic; it made us understand the humility of these great artistis. You don’t expect that! First of all, their generosity. Imagine a vocal band from Salerno that asks Claudio Baglioni and Lucio Dalla to collaborate. You expect something like: “I’ll let you know” but instead you get an immediate “yes”. And then you realise that perhaps you are doing something good. Then the experience in the studio with these people was fantastic. When you finish recording a song with Baglioni and he says: “So Ciro, how did it go? What do you think?” I couldn’t believe. I am still recovering from the shock.

I-LARK: As a person you are free from pretentions or affectations too, Ciro. You have done wonderful things but you have always stuck to your true self. That’s great.

CIRO CARAVANO: Basically, I think that being humble doesn’t necessarily mean having a lowly opinion of oneself. In the sense that you can be humble but at the same time be aware that you know how to do certain things. And that’s what I’ve found in the ‘greats’ I’ve met: people who are capable of accepting challenges, of questioning themselves, but who are not unaware of their talent.

I-LARK: That must have been a fantastic experience. The two album list a series of male and female celebrities. A brave and intelligent project. But let’s move on to another point. Among your experiences, you have been conductor and arranger of choirs. Your current choir is called Coro Pop di Salerno. It looks like a continuation of a previous project, if I understand correctly.

CIRO CARAVANO: At the beginning it was the choir of the University of Salerno. Then fundings were cut and there was no longer any possibility of continuing the collaboration, so we had to interrupt this extra-curricular experience for students of the University of Salerno. We should have ended the experience, but in fact we were so convinced of what we were doing (I’m talking about our ‘choral family’) that we re-founded the choir, independently, and I must say that it went well because we doubled the number of participants. We’re going through a particular period now, but we still manage to do things at a distance despite the current pandemic.

I-LARK: I’ll ask you about that in a moment, but first tell me how many people are there in you choir.

CIRO CARAVANO: They are 70; 65 are actual singers and then there are supporting members.

I-LARK: But what is a pop choir exactly?

CIRO CARAVANO: A pop choir is a choir where we sing pop music. We also like irony and parody. We love to play with genres. We do mashups. For example, we sing a song by Mina and merge it with Bud Spencer’s firemen’s choir, we take Vasco Rossi’s Alba Chiara and mix it with Pachelbel’s Canon. We love the classics but with a bit of fun. In short, ours is a way not only of playing music but playing with music.

I-LARK: Through choirs, on the other hand, you can nurture a very meaningful sociality; members grow together, also emotionally, while singing, so to speak, therefore it is very important educational method (since you’re dealing with young people, whose images I’ve seen on the internet: very joyful videos, communicating a lot of hope). In this respect, I would like to ask you something about your experiment in transforming the Pop Choir into a ‘virtual choir’, because I can see that you have worked a lot on this project. Going virtual was also a way of dealing with this new condition we all are in now and which will be with us for a while yet. Tell me something about this.

CIRO CARAVANO: The desire to be together, to make music together, did not die out with the Covid emergency. Fortunately, technology has helped us in this. It’s clear that it’s still not possible to distant sing synchronically, therefore we dedicated ourselves to video recording. Then in audio and video post-production we still managed to create something; we posted a series of videos on all our social networks. A way of being proud, as a choral family, of what we are doing. When we can’t all get together to sing, we still manage to produce songs. We were asked by Radio DJ to collaborate on a Christmas song. On that occasion we had the pleasure to sing with famous people. There have been and there still are many opportunities to make good music. Then I managed to persuade the guys in the choir to buy the equipment for a green screen and this gave me the opportunity to put everyone together virtually in the video; we look very close to each other: the distance among us would be considered ‘illegal’ under current regulations. Obviously this is a virtual reconstruction. This experience made us want to continue along these lines. In fact, I am not sure if we’re the only ones now, but we’re definitely among the choirs who have taken the crazy decision to distant record an album. We were already recording a new CD and we decided to continue, but simply to do it from our own homes; all coordinated by me. Recording is under way.

I-LARK: Your vocal projects thrive! Thank you for giving us hope and strength with your voice and your work, Ciro.

CIRO CARAVANO: Thanks to you

I-LARK: And I look forward to the next episode of our podcast with a new guest of Voice in the Matter. 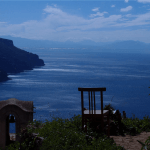 But Not For Me: Omaggio A Judy Garland